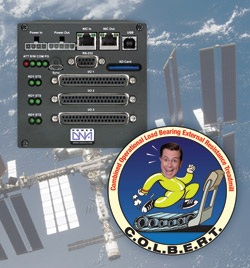 United Electronic Industries (UEI) is pleased to announce that NASA has selected the UEIPAC Cube to perform an essential role in controlling the COLBERT treadmill in the new space station exercise facility.

Though Comedian Stephen Colbert won the highly publicized write-in contest for naming its new facility, NASA followed its long-standing policy of not using names of living people for space hardware and instead chose to name it “Tranquility” in honor of the original Apollo 11 Moon landing. In a tip of the hat to the comedian, however, NASA did decide to use the name COLBERT for the exercise treadmill to be installed in the new facility — an acronym for Combined Operational Load Bearing External Resistance Treadmill. The new treadmill is scheduled to be “up (way up) and running” early next year.

The astronauts need the treadmill both for exercise and for maintaining bone density in a gravity-free environment. Some of the functions monitored by the UEIPAC are characteristics of the astronaut’s gait and foot impact forces while exercising on the treadmill. This is determined by sensing data of various types from accelerometers and load cells in the treadmill and associated restraining equipment.

The fact that the UEIPAC hardware is a very compact, rugged design that makes efficient use of conductive cooling makes the unit ideally suited for space applications. Another novel feature of the NASA system design is the use of a finite state machine software structure to control the functioning of the UEIPAC and the treadmill. The UEIPAC was a good match for this application because the Linux driver and cross compiler supplied by UEI were all compatible with the FSM structured software used for the embedded system control. According to Shaun Miller, UEI President, “It is exciting to think that our products are being used in space. It’s also gratifying to think that we are contributing to general scientific progress. UEI is proud to be a part of this effort.”

UEI’s powerful “Cube” architecture is a compact (4 x 4 x 4″ or 4 x 4 x 5.8″) Ethernet-based I/O platform that can be deployed in four different configurations:

Each Cube consists of a core module (that holds the processor and network interface) along with three or six open I/O slots. Users select the deployment option that meets their requirements. Users then match the Cube’s I/O configuration to their application by selecting the appropriate boards. With over 25 I/O boards available, there’s sure to be a configuration to meet almost any application requirement. The six slot Cube provides up to: 150 analog inputs, 192 analog outputs, 288 digital I/O, 48 counter or quadrature channels, 72 ARINC-429 channels, 24 Serial or CAN-bus ports, or 12 1553 communication channels. A full description of the “Cube” family is available at http://www.ueidaq.com/