White Paper: A Modern Alternative to Reflective Memory and VME 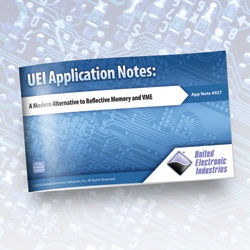 Walpole, MA (July 13, 2010) — United Electronic Industries (UEI) has released a new white paper/case study/application note that highlights the benefits of using UEI’s Ethernet RACKtangle and Cube I/O Chassis instead of Reflective Memory and VME. Manufacturers of reflective memory/VME systems are increasingly having to make difficult re-design decisions as VME products are gradually being discontinued. There is nothing more disconcerting to a system supplier than being faced with an end-of-life “last buy” notice from a supplier of a key system component. Fortunately, UEI can offer equivalent replacement components for VME products that not only satisfy the functional specs but also offer improved performance and lower cost as well.

The case study included in the white paper describes the benefits FlightSafety International realized by moving away from outmoded VME-based technology to UEI’s modern Ethernet I/O solutions. By switching from VME hardware and reflective memory to UEI I/O chassis and Ethernet technology, FlightSafety not only extended the design life of its simulator products, but also achieved improved performance, and realized significant cost savings. Its customers achieved similar goals.

A copy of the white paper can be found here.