UEI Releases Part 2 of the Introduction to DAQ White Paper 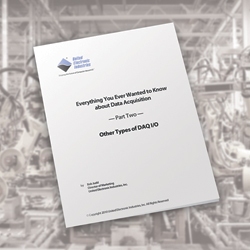 Walpole, MA (March 1, 2012) — United Electronic Industries (UEI) has released Part Two in their three-part series of white papers called, “Everything You Ever Wanted to Know about Data Acquisition.” While the primary focus of the first white paper in the series was analog inputs, this new paper introduces and explains some of the less common or “second tier” I/O DAQ hardware, including: Motion I/O, Synchros and Resolvers, LVDT/RVDT, String Pots, Quadrature Encoders and Piezoelectric Crystal Sensors, as well as Communications I/O standards such as ARINC 429, MIL-STD-1553, CAN, common RS standards as well as clock, sync and timing standards.

“Everything You Ever Wanted to Know about Data Acquisition” Part Two, is available as a free download.