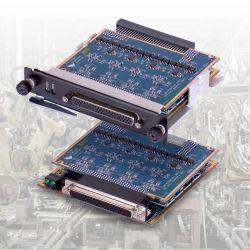 United Electronic Industries (UEI) is pleased to announce the release of the DNx-AI-254 LVDT/RVDT interface boards. The boards are available in two models — one for use with UEI’s popular PowerDNA Cube and another for rack-mounting in a PowerDNR RACKtangle chassis. Multiple operating modes ensure compatibility with all standard sensor wiring and excitation configurations, making the boards suitable for a very wide range of linear and rotational motion applications. Each board has four fully isolated, LVDT / RVDT channels with independent A/D converters, and each channel offers 16-bit resolution, 0.1% accuracy, and scan rates up to 500 Hz.

Each channel may be configured to output a 100 to 5 kHz programmable excitation voltage to the primary of an LVDT/RVDT device or alternatively as the simulated output voltage from the secondary of an LVDT/RVDT. In simulator mode, the board uses a software-defined value as the position input for a simulated device.

“The ability of the new AI-254 to operate either as an LVDT / RVDT input interface or as a simulated output is a first in the industry, which opens up a whole new range of applications.” said UEI President Shaun Miller. “In addition to the exceptional performance of the new board, no other vendor offers the flexibility of UEI’s Cube and RACKtangle form factors and Ethernet Slave, Data Logger, Programmable Automation Controller, or Simulink target deployment options.”

The RACKtangle I/O chassis offers a similar capability as the cube, but in a more conventional, 3U rack form factor with easily replaced front-loading I/O boards. In addition, it offers 12 I/O slots and supports up to 300 A/D, 394 D/A, 576 DIO, 144 ARINC-429 or 96 CAN or Serial I/O ports. The Gigabit interface also provides two independent ports, one used for primary system control and the second used for real-time diagnostics.